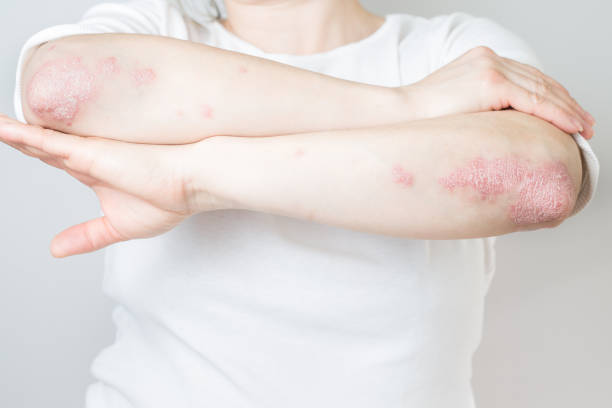 Psoriasis is not a life-threatening disease, but it can be uncomfortable and embarrassing. In some cases, psoriasis can also lead to other health problems. People with psoriasis are at a higher risk of developing heart disease and other cardiovascular problems. They are also more likely to suffer from depression and anxiety. Psoriasis can also lead to skin cancer. People with psoriasis should regularly check their skin for any signs of cancer. While psoriasis is not dangerous, it can undoubtedly lead to other health problems that should not be taken lightly. If you have psoriasis, be sure to talk to your skin doctor about how best to manage your condition. Let’s know about psoriasis in detail and learn, in fact, about the risk factors of psoriasis.
What is psoriasis?

Psoriasis is a non-contagious, autoimmune disease. Autoimmune diseases are caused when the body’s immune system starts attacking healthy cells in the body by mistake. Psoriasis causes patches of thick, red skin covered with silvery scales to appear on different body parts. The severity of psoriasis ranges from small patches that have no symptoms to severe cases that cover most of the body and cause serious complications.
Which types of psoriasis are dangerous?

Erythrodermic psoriasis: This is the most dangerous type of psoriasis. Erythrodermic psoriasis causes thick redness and scaling over most of the body, accompanied by fever, chills, and severely dry skin. This can lead to life-threatening complications such as infections and loss of fluids through the skin (called “excessive transudate”).

Plaque psoriasis: Plaque psoriasis causes patches of thick, itchy red skin covered with silvery scales. It most commonly appears on the elbows, knees, and trunk but can appear anywhere on the body, including nails, palms, and soles. Inverse plaques are found in hair follicles and on top of inflamed or irritated areas where open sores may be scratched. In mild cases, plaques may disappear within a few weeks or months without treatment, but in more severe cases, they persist for many years and can lead to thick skin on the palms of hands and soles of feet.

Pustular psoriasis appears as raised bumps filled with pus surrounded by red skin. It most commonly affects the hands and feet, but it may appear in other body areas.

Guttate psoriasis: This is one of the most common types of psoriasis, especially in children and adolescents. The condition begins with small red spots that develop into larger patches with tiny scales that eventually peel off. These patches frequently form around the armpits, elbows, knees, and the back of the neck, but they can show up anywhere on the body.

Inverse psoriasis: This often appears on skin fold areas such as the armpits, groin, and under the breasts. It looks like red, itchy patches that are covered with silvery scales. Inverse psoriasis may also appear on other body areas, including on top of inflamed or irritated areas where there may be open sores from scratching.

Nail changes in psoriasis: Psoriasis can affect nails and fingers in two ways: Nail psoriasis doesn’t directly cause nail damage, but it alters growth, and unbalanced pigment nails can look odd and lead to embarrassment or further skin problems. About half of all people with psoriasis have some form of nail involvement.

Pitting in nails: This is the most common type of psoriasis-related nail change seen in almost all patients with nail psoriasis. Pitting occurs when the nails grow out, and the new cells pushing up from underneath the old cells get trapped in the pits, making them look white or yellow.
How common is psoriasis?

Certain factors can cause psoriasis or trigger flare-ups. These include:

2. Stress: Emotional stress can trigger psoriasis flare-ups in some people.

3. Drugs: Some drugs, including lithium and beta-blockers, can trigger psoriasis.

4. Alcohol: Drinking alcohol may make psoriasis worse in some people.

5. Smoking: Smoking cigarettes may increase the risk of developing psoriasis and worsen it if you do have the disease.

7. Hormonal changes: Changes in hormone levels, such as during pregnancy or menopause, may trigger psoriasis.

8. Genetics: Psoriasis is believed to be partly hereditary. If one of your parents has psoriasis, you are more likely to develop the disease yourself.
What are the complications of psoriasis?

Several complications can be caused by psoriasis:

-Vascular disease: Psoriasis can affect the blood vessels in your skin. This is known as vascular psoriasis, and it makes itself known by swelling of the feet or lower legs and sometimes redness and pain in these areas. It may also make existing varicose veins worse, which can cause pain in the leg when standing or walking for long periods.
What are the treatment options for psoriasis?

Many treatments are available to help control the symptoms and reduce new flare-ups. These include:

1. Topical therapies: Topical medications may be enough for mild to moderate psoriasis. They come as creams, ointments, or oils that you rub on your skin. Some of the most common ingredients in these preparations are coal tars, vitamin D analogs (calcipotriene), and corticosteroids. Sometimes, dithranol can be added to these topical medicines for better effect. Your doctor will choose one of these remedies based on your age, sex, body mass index (BMI), and general medical history.

2. Phototherapy: For moderate to severe psoriasis, ultraviolet (UV) light therapy may be recommended. This is also called phototherapy. There are two types of UV light therapy:

-Broadband UVB therapy: This type of treatment uses a wide range of UVB wavelengths. It is the most common type of phototherapy used for psoriasis.

-Narrowband UVB therapy: This type of treatment uses a narrower range of UVB wavelengths. It is sometimes used if broadband UVB therapy is not practical.

-Methotrexate: This is a chemotherapy drug often used to treat psoriasis. It works by slowing down the growth of cells in the skin.

– Cyclosporine: This is an immune system suppressant medication that is sometimes used to treat psoriasis. It works by blocking the action of specific cells in the immune system that contribute to psoriasis symptoms.

– Acitretin: This is a retinoid medication that is sometimes used to treat psoriasis. It helps to normalize skin cell production and reduce inflammation.

4. Biologic therapies: A newer type of systemic medication used to treat psoriasis is called a biologic agent. These medications are made from human or animal proteins, and they work by blocking specific proteins in the immune system that contribute to psoriasis symptoms.

6. PUVA: PUVA is short for psoralen plus ultraviolet A therapy. It is a combination of a drug called psoralen and UV light therapy. Psoralen makes your skin more sensitive to UV light so that the light therapy works better.

7. TNF inhibitors: TNF inhibitors are a newer type of systemic medication used to treat psoriasis. They work by blocking a protein in the body called tumour necrosis factor (TNF). Blocking TNF helps to reduce inflammation and the symptoms of psoriasis.
What are the natural treatment options for psoriasis?

There are several things you can do at home to help reduce your symptoms and prevent flare-ups:

-Keep your skin moisturized: When your skin is dry, it can itch and crack. This increases the risk of getting an infection that may trigger flare-ups. Moisturizing lotions specially formulated for psoriasis are available without a prescription. You can also use petroleum jelly, lanolin, or oil to help keep your skin moist.

-Avoid sun exposure: If you have areas of affected skin on your body, try to avoid direct sunlight as much as possible. When you are outside, try to wear clothing covering your affected areas or slather them with sunscreen.

-Don’t pick at your skin: Picking at scabs caused by flaky patches of psoriasis can lead to infections, so avoid touching these areas. Use gloves to wash dishes, clean, and do other tasks that could cause you to pick at your skin.

-Use a humidifier: Having dry air in your home can irritate the skin on your body and worsen psoriasis symptoms. If possible, use a cool-mist or ultrasonic humidifier in your home when heating dries out the air during the winter months.
Can psoriasis be prevented?

There is no way to prevent psoriasis from developing, but some things might reduce the severity of flare-ups. These include:

-Avoiding skin irritations: Psoriasis can be made worse by skin injuries, including bug bites, cuts, and scrapes. Avoid scratching any affected areas of your skin.

-Medications: Some medications may help relieve the inflammation associated with psoriasis flares. These include NSAIDs (nonsteroidal anti-inflammatory drugs), such as ibuprofen, aspirin, naproxen; topical corticosteroids; and COX 2 inhibitors like Celebrex (Celebrex).

-Stress management: Stress can make psoriasis worse in some people, so learn ways to cope with stress. Avoid stressful situations as much as possible. Practice relaxation techniques such as deep breathing or meditation when you can’t.

-Dietary changes: Some people find that their psoriasis flares up after eating certain foods. If you think this might be the case for you, try making an appointment with a dietitian specializing in food allergies and sensitivities.

-Sunlight may help reduce your symptoms: Exposure to sunlight may help people with mild psoriasis, but too much can make it worse, so use sunscreen when you are outside. Schedule regular times every week to sit in the sun for short periods if possible.

-Exercise: Exercise can help reduce stress and improve your overall health. It is also beneficial for people with psoriasis as it can help to improve blood circulation. Try to get at least 30 minutes of aerobic exercise every day.